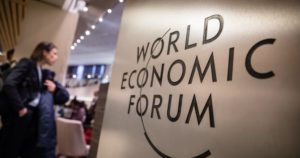 Blockchain was one of the most lauded developments at the Forum. Christine Lagarde, the Managing Director for the International Monetary Fund (IMF) called blockchain technologies “fascinating”

Investor and philanthropist George Soros said that blockchain “can be put to positive use,” giving the example of “helping migrants to communicate with their families and to keep their money safe and carry it with them.”

Cryptocurrencies did not receive so warm a welcome from many prominent figures, including the governor of the Bank of Canada, Stephen Poloz, who said that “There is no intrinsic value for something like bitcoin so it’s not really an asset one can analyze. It’s just essentially speculative or gambling.“

2013 Nobel Prize winner Robert Shiller said that cryptocurrencies are “an interesting experiment, but it’s not a permanent feature of our lives. We are over-emphasizing bitcoin, we should broaden it out to blockchain, which will have other applications.”

The anonymity of cryptocurrencies was also a concern. Treasury Secretary Steve Mnuchin expressed concern about the way cryptocurrencies are being used, stating that his “number-one focus on cryptocurrencies, whether that be digital currencies or bitcoin or other things, is that we want to make sure that they’re not used for illicit activities.”

Similarly, Christine Lagarde from the IMF said, in regards to cryptocurrencies, that “The fact that the anonymity, the lack of transparency and the way in which it conceals and protects money laundering and financing of terrorism, is just unacceptable.”

However, many investors were not dissuaded. Nick Cary, co-founder of the Blockchain wallet, said that “You have to look at the fundamentals. To us, we are seeing increases in transaction volume and to me that’s one of the first indicators that more people are using this in their daily lives and that’s really interesting to me.”

Cryptocurrencies and the blockchain have been one of the most talked about technologies at this year’s conference, although not every speaker agreed what its future will look like. /ccn/