To reach Enigma, the main base of one of the fastest growing businesses on the planet, you first have to fly to Reykjavik. Next, you drive along several roads until you reach a dirt track. It is then a rough ride for a few miles until you arrive at three nondescript white warehouses.

The warehouses are on a volcanic plain surrounded by what looks like a fenced-off building site with earthworks, Portakabins and stacks of building equipment. Given the value of what’s inside the buildings, I’m surprised there is no sign of armed guards or any security.

‘Ha! Don’t worry; they have seen us already,’ says Marco Streng, 28, the very charming founder and CEO of Genesis Mining, the company that owns the warehouses. Long before we reached the threshold of the Enigma plant, we were picked up by cameras and monitored by motion sensors.

‘This place is very sensitive,’ says Streng.  ‘People even look at geothermal maps trying to find places like this. Not everyone on the planet has the best intentions. Some people want to break in. Others want to hack it or steal the machines.’

Has Streng had any problems? ‘A lot of hackers trying to break into the system.’ What about unscheduled visits by strangers in black? ‘Er, no, not really, luckily. There have been kidnappings of cryptocurrency people. So I need to be very careful.’ Cryptocurrency ‘mining’, which is how Streng makes his money, is a weird business. For a start, it has nothing to do with digging holes.

The phrase is computer jargon for the process of creating digital moneysuch as Bitcoin – the virtual currency that hit the headlines last year when its value shot into the stratosphere and made some owners millionaires, or even billionaires. Second, creating, or mining, cryptocurrency does not involve a bank or pieces of paper. Bitcoin was devised by Satoshi Nakamoto, a pseudonym for what is believed to be a business-savvy mathematician or a group of mathematicians.

In order to generate a new unit, one has to use a special high-powered computer – or, in the case of Genesis Mining, tens of thousands of them. This is one of the reasons why Enigma’s warehouses are based in Iceland: the company needs cold weather to prevent the computers overheating.

At the moment, Genesis Mining is more than economical: this time last year the company had 500,000 customers; today it has two million. It is the largest player in the fastest-growing sector of the world economy, and everybody is trying to replicate its success. ‘We have started a gold rush,’ says Streng.  ‘Everyone wants to get into crypto-mining. It is so profitable.’

He nods towards an adjacent building site where a crane presides over the skeleton of a large warehouse. ‘Competitors,’ he says. ‘KPMG has told us there is a “Genesis Mining model” – people come to them and say they want to do exactly the same as us.’ It is quite an achievement./telegraph/ 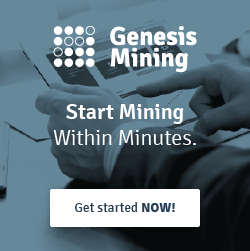