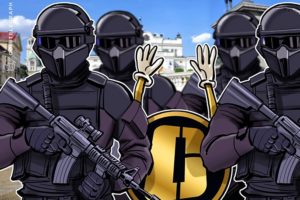 OneCoin offices were raided and its servers seized in Sofia, Bulgaria, on Jan. 17 and 18, as yet another step in a series of international raids and court cases against the highly-controversial altcoin. Although the servers were shut down, OneCoin currently remains operational.

The raid took place at the request of the prosecutor’s office in Bielefeld, Germany, and was carried out by representatives of the Bulgarian law enforcement as well as European Union crime fighting units. OneCoin’s founder, Ruja Ignatova, is Bulgarian-born but has German citizenship.

OneCoin, which promotes itself as a “centralized model [that] protects its members’ safety and ensures compliance on AML [anti-money laundering],” does not fit the definition of a cryptocurrency, for it is not decentralized, does not run on open-source software, and does not have a public ledger.

The documents and servers were seized from “One Network Services” EOOD, a Bulgarian company serving as a representative and distributor of OneCoin, as well as 14 other companies. 50 witnesses were questioned during the raid, but no arrests have yet been made.

The company is registered officially in the United Arab Emirates as “OneCoin Ltd.,” but according to the Bulgarian police report, the company operates through

“Hundreds of affiliated companies on 4 continents […] [which] are being investigated in England, Ireland, Italy, the United States, Canada, Ukraine, Lithuania, Latvia, Estonia and many other countries.”

A OneCoin representative faced charges of fraud in Kazakhstan in May 2017, and in India, police had arrested 23 people in connection with OneCoin’s pyramid scheme by July 2017.

More recently, in August 2017, the Italian Antitrust and Consumer Protection Authority (AGCM) branded OneCoin a Ponzi scheme and fined them 2.5 mln euros, the first financial fine on the company.

Cointelegraph has previously denounced OneCoin as a Ponzi scheme, warning readers to stay away from the coin. /cointelegraph/